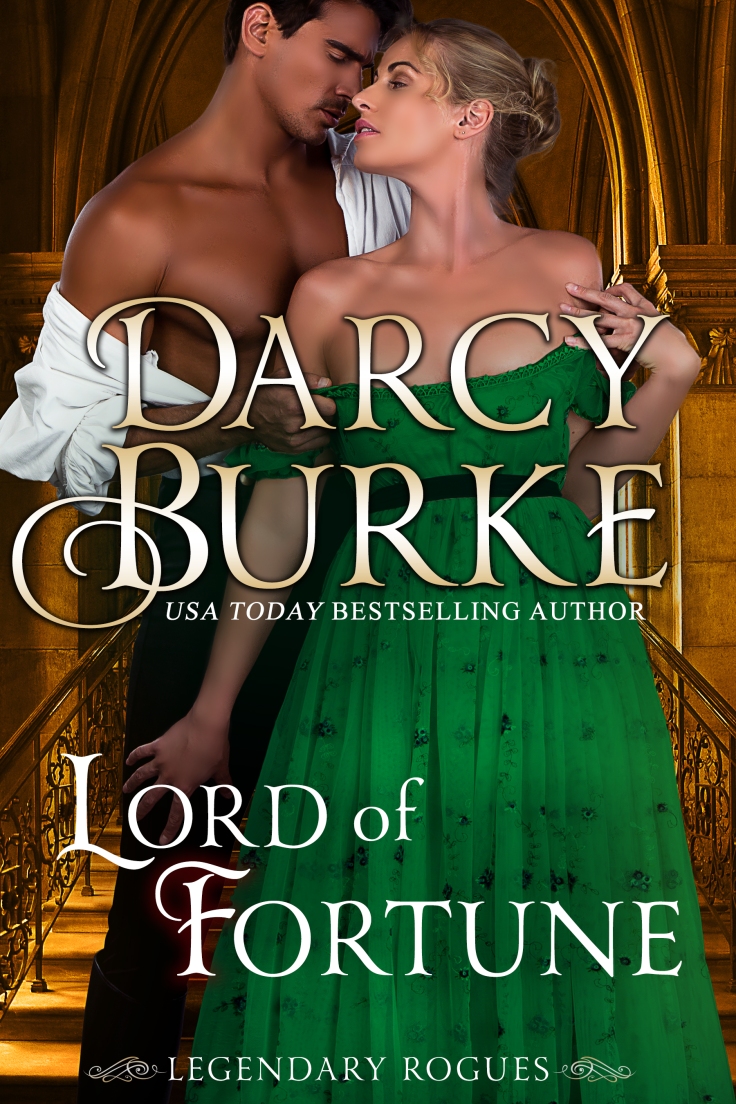 Lord of Fortune, an all-new historical and romantic standalone from Darcy Burke is LIVE!

Dashing adventurer Penn Bowen is dedicated to preserving Britain’s history and his carefree, bachelor lifestyle. He’s happiest when he’s in pursuit of knowledge and the occasional liaison with the right woman. So he’s more than a little perturbed when the wrong woman inserts herself into his latest quest—proving that a valuable artifact in Oxford’s museum is a fake. Amelia Gardiner is smart and capable…and determined to prove that Penn is wrong about the treasure her grandfather found.

Amelia won’t allow Penn to denigrate her family’s legacy, and she certainly won’t join the ranks of women who throw themselves at his feet. As secretive and dangerous factions infiltrate their hunt, Amelia and Penn must work together to stay one step ahead. But passion ignites between them and suddenly their alliance is more than a simple convenience. When peril strikes too close, they’ll risk everything they hold dear: family, honor, and a chance for the greatest treasure of all—love.

Her brow pleated for a moment. “Not particularly.”

He wasn’t sure he believed her, but he’d have to take her word for it since he barely knew her. Though he hoped they were rectifying that.

Did he hope to know her better? Certainly, if it meant gathering information he needed to find the real heart and dagger. As to that—he needed to convince her to accept his partnership, especially if the Order was involved. “The Order’s primary objective is to keep the Thirteen Treasures—and really anything to do with them—from being found or publicized. They want them to remain a legend.”

He lifted his right shoulder. “Or not.”

She rolled her eyes and pursed her lips. “Does the Order agree with that assessment?”

“I can’t say for certain—let me be clear: I am not a member. Members are, for the most part, descendants of the knights.”

“How can that be possible if it’s all a legend?”

“The Order wants everyone to think it’s all a legend. I didn’t say they believed that.”

After the innkeeper left, Mrs. Forrest shook her head. “That seems ridiculous. What is their reasoning?”

“That the treasures are too powerful, that if they were to be found, they would cause strife and conflict.” He sliced off a piece of ham and brought it to his mouth.

“War?” She stared at him a moment, and her shoulder twitched as if she suppressed a shiver. “My grandfather told me once that he gave the heart to the museum because it was far too valuable to keep. He feared someone would steal it.”

Penn relaxed slightly. Her sharing such a thing with him was progress.

Her brow furrowed once more and stayed that way as she spoke. “What he said in the letter… Was he afraid of this Order? Do I need to be concerned?”

It was the perfect opportunity to bind her to him, to encourage her reliance, but he’d also said he wouldn’t lie. “You do not need to be afraid. Concern, or wariness, is always a good thing. Even if you decide to associate with me.”

She gave him a dark but curious stare. “And what do I need to be wary about with you?”

He didn’t think she meant any sort of innuendo, but his brain took that route automatically. Lout. “I don’t plan to steal anything from you. I merely want to share information so that we may get to the heart—pardon the pun—of the matter.”

She rolled her eyes again, but this time, the edge of her mouth ticked up with humor. He suppressed a smile before taking another bite of ham.

After he swallowed, he said, “I only meant that being guarded will serve you well. That said, you can trust me.”

She let out a short laugh. “One of the first things you said to me was that you didn’t trust me, and now you expect me to trust you?”

He had said that, blast. And he’d meant it. Did he trust her now? Not completely. But then the list of those he trusted completely was quite succinct—his parents and his sister. “How about we give it a try?”

There was something about her… Something he wanted to discover. She, like all women, was a mystery. The difference was that he wanted to investigate this one.

Amazon US I Amazon Universal I iBooks I Nook I Kobo

Darcy Burke is the USA Today Bestselling Author of sexy, emotional historical and contemporary romance. Darcy wrote her first book at age 11, a happily ever after about a swan addicted to magic and the female swan who loved him, with exceedingly poor illustrations. Join her reader club at http://www.darcyburke.com/readerclub. A native Oregonian, Darcy lives on the edge of wine country with her guitar-strumming husband, their two hilarious kids who seem to have inherited the writing gene, two Bengal cats and a third cat named after a fruit.